Following Bob’s email to our membership yesterday he has also asked me to post it on the website.

I am writing to inform you of an important update to the arrangements for the 2019 Home Nations and to allay any rumours you may have heard.

I must inform you that:-

1. For internal reasons, the Monkstone Petanque Club have unfortunately decided to withdraw from hosting the 2019 Home Nations.

2. WPA Executive Committee are currently working hard to identify an alternative venue and we will keep you updated with our progress.

3. In-line with the Competitions Rules, the WPA Executive Committee is exploring the possibility of amending the team order within the Welsh Squad for the Home Nations. This decision has not been taken lightly and we are attempting to ensure the minimum disruption to the Welsh squad along with the smooth-running of the Competition. The new team order will be announced in the near future.

Finally, I am delighted to let you know that following her excellent work during the Celtic Challenge, Michelle Spencer has agreed to take on the role of Team Manager for the Welsh Squad and I hope you will respect her position and support her in this vital role.

As your Exec. we will endeavour to keep everyone informed of developments as they happen and would appreciate the support and co-operation of you, our members.

Previous posts have mentioned it and everyone should be aware that all teams entered into a WPA qualifying event or WPA competition must wear matching tops, something that isn’t always easy if the team members are from different clubs.

As we are all aware, we now have the new Welsh shirts for “International” competitions (Celtic Challenge and Home Nations included) and these now supersede all earlier versions.  As a result, the Exec. has agreed that players may play in the older style WPA shirts which will hopefully assist you in arranging matching shirts.

If team members have the earlier style Welsh shirts it will save them the cost/trouble of getting matching shirts and the dreaded £10 fine for not wearing matching tops can be avoided.

Today saw the start of the 2019 Celtic Challenge.

It opened with welcoming words from Cllr. Margret Griffiths, Rhondda Cynon Taff and her husband Cllr. Paul Griffiths, leader of Pontyclun Community Council, these were then followed by welcoming speeches from Bob Pugh, president of the WPA, Heads of delegations for Ireland and Scotland along with Gareth Jackson, President of the hosting club (Pontyclun PC) and Bob Parker from the English Pétanque Association, our guest umpire.

The competition started and all teams were up to the challenge, Wales A had to play their first games against Wales B which was a tough fought battle with Wales A finishing 8 – 4 ahead at the lunch break.

Similarly, Scotland were showing Ireland no quarter in their early rounds and they too finished 8 – 4 up at the break but Wales A were ahead on points.

The afternoon session started with Wales B taking games off Wales A, Scotland continued their strong play and by the close of play had held their nerve and continued to take games from all angles including those against the home nation.

The day finished at:-

Tomorrow brings a new day and more great games, there were a few nail biters there today and I am sure there will be many more tomorrow.

There will be more pics posted soon, don’t forget to watch out on the WPA facebook page for the games that are being live streamed.

Last Sunday the Welsh National Veteran’s Triples Championship was held at Monkstone PC and as can be seen from the results below it was a tough contest.

We were incredibly lucky with the weather following the visit from Storm Hannah on Saturday, it was actually a pleasant day.

The other semi-final was between Roger Green/Gill Clarke/Phil Roberts and Barbara Vaughan/Bob Pugh/Kon Tomczyk which saw Barbara, Bob and Kon clinch that with a 13-6 win.

This then brought us to the final which was between Linda Hutchinson/Jim Hutchinson/Pat Davis and Vaughan/Bob Pugh/Kon Tomczyk. This was another closely contested game with some excellent pointing on both sides but slightly stronger team of Barbara, Bob and Kon eventually won 13-8.

Both teams will be going on to represent Wales in the Nations Cup Veteran’s Triples International Invitation which is being held at Monkstone PC over the weekend of 29/30th  June.

Thanks to all the teams that took part in this making it a successful event and a special thank you to Monkstone PC for hosting it.

This is the second time we have seen El Presidente Pugh qualify to represent Wales this year, he also came second in the President’s Cup. . . . . . Folks, it’s time we pulled our fingers out and done something about this streak . . . lol.

Message from the National President:
Huge thanks to the members of Caerleon RFC for hosting today’s President’s Cup, especially Konrad Tomczyk for organising.
Two teams finished on 5-wins with the victory honours going to Gemma Foster, Tansy Mayfield and Richard Harris.
Runners-up were Mathew Howells, Robert Pugh & Gareth Spencer.
More importantly, that means all-4 players heading to Almeria for the World Championships in 2-weeks had some excellent practice.
Well done to everyone who turned up and played. 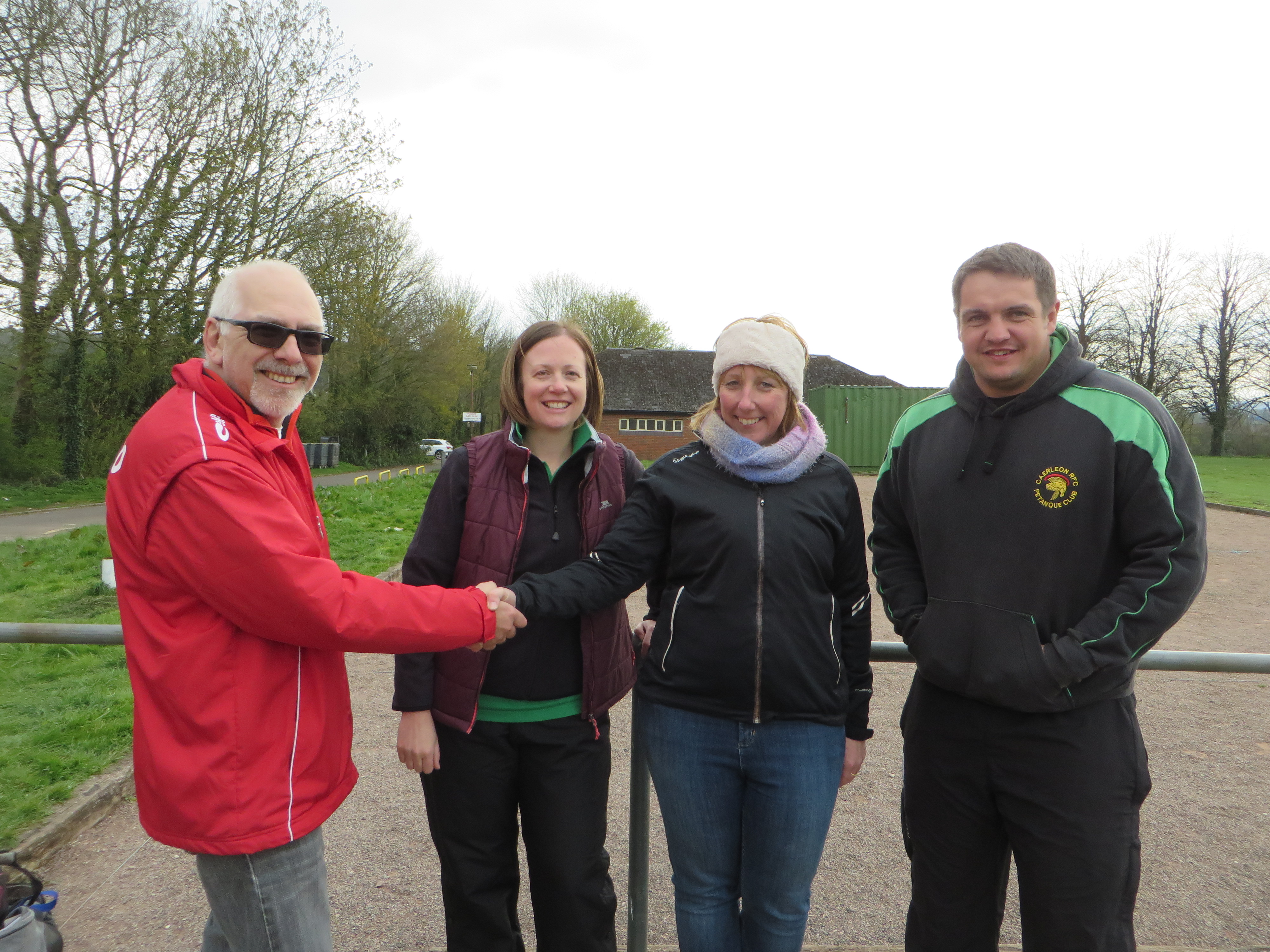 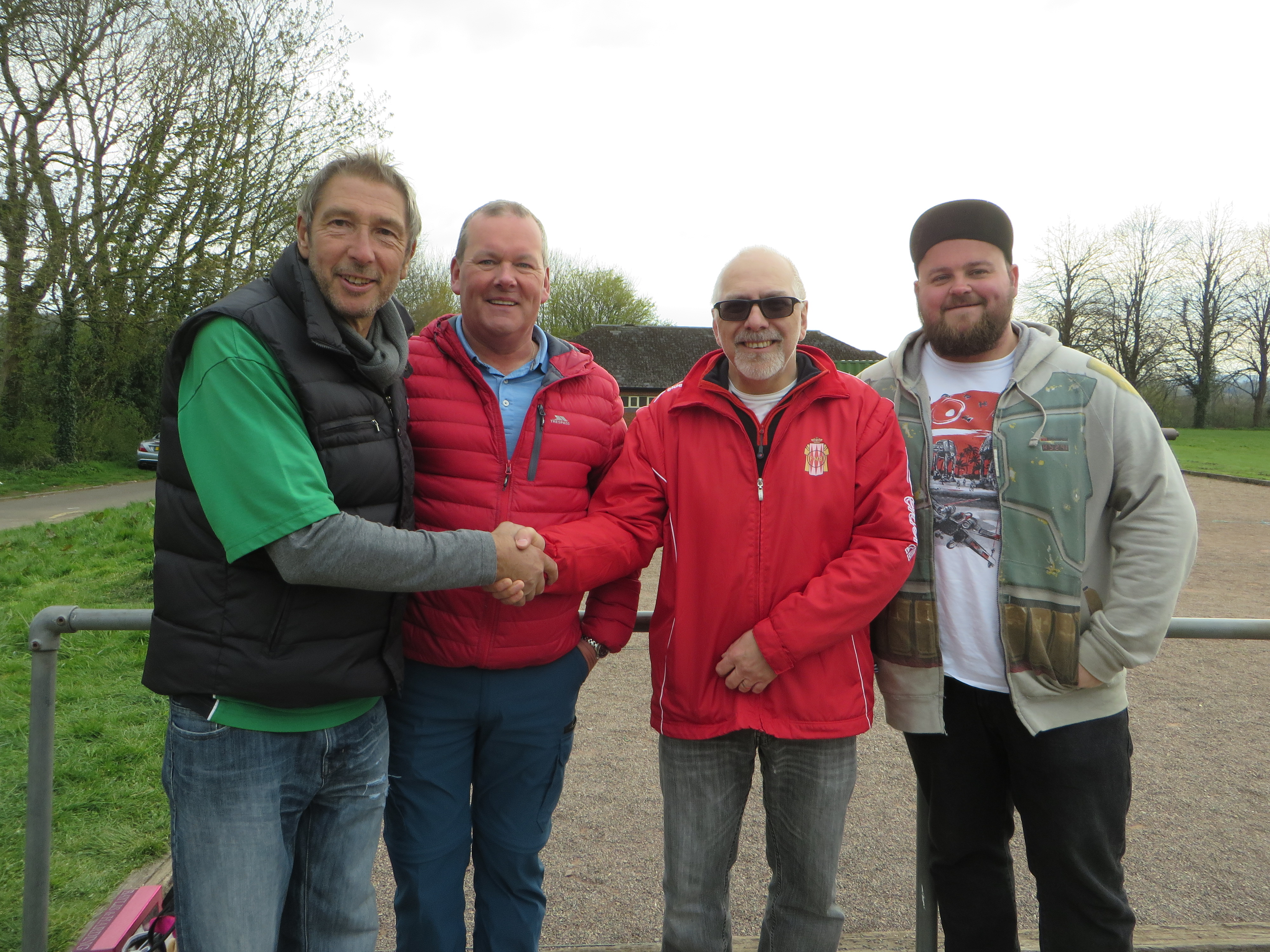 Last Sunday we had a great turnout at Pontyclun PC on what was not the warmest of days, the days preceding it were glorious as was the day following it but it was March in Wales, what did we expect.

16 teams entered to compete for the eight places available to represent Wales at the Celtic Challenge, which is being held at the same venue over the weekend of the 4th – 5th of May 2019.

It was a tightly contested event on what were generally thought to be challenging pistes. With two teams winning five out of six games and three teams winning four of their six we were left with eleven teams and places for only three of them to represent Wales.

Of the eleven remaining teams six of them had won three games and lost three which meant it came down to points and the Swiss System that was being used to decide who would go through to represent Wales, the final results are in the table below.

Congratulations to all who took part making this a successful event and good luck to the top eight teams who qualified and will be representing Wales in the Celtic Challenge (the rest of us need to get practicing so we are ready to do it all over again for the Home Nations qualifiers).

A big thankyou to Graham Attfiled and Tony Smith for setting up the scoring system and running the event and to Pontyclun PC for hosting it.

We are holding a WPA OGM at Caerleon Petanque Club on Wednesday 3rd April at 7:30pm.

We look forward to seeing you there.

The Exec. would like to pass on their thanks to a member of the WPA that works very hard behind the scenes and without her there would be no league.

As many of you will have noticed, Vickie has posted an update on this year’s league and we are sure there will be many more to come.

Thank you Vickie, your hard work does not go un-noticed.

We would also like to ask all teams to send the results from every league match to Vickie on the evening of your match, this is not a great ask with modern communications and will assist her greatly.