The morning session saw the teams play in two leagues to decide their ranking and opposition in the afternoon knockout phase. The top team from Group A was Julie Bailey (SWBRC-PS) & Jayne Dunn (Monkstone PC), and Group B Simone Ballett & Sonia Ford (SWBRC-PS).

The first round of the afternoon knock-out session saw the following teams drawn against each other:

The second round (semi-final) of the afternoon saw the winners of round 1 coming together with: 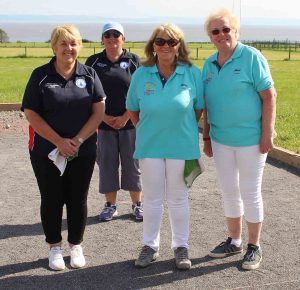 The final was a tight match between two experienced teams, Gail Brooksbank & Linda Hutchinson, who took an early lead, but Julie Baily and Jayne Dunn fought back to take the match and the title 13-10.

The WPA would like to thank the Executive and Membership South Wales Bowls and Recreation Centre-Petanque Section for their support during the competition.