It is with great sadness that we report the passing of Malcom Beer:

It is with great sadness the passing of Malcolm is announced. 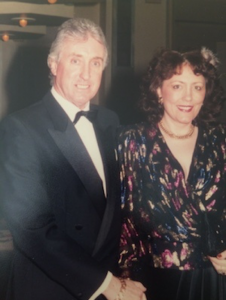 For those who remember him it brings to mind a picture of his devotion to actively forming along with Colin Ballett, Hugh Harrisons and others the development of Penarth Petanque Club and personally liaising with the council for the twinning visits to St Pol de Leon and Petanque.

Pictured here with Janet his wife who supported him with this.

Malcolm was a successful business man and very much a people person bringing to Penarth Petanque a sense of commitment, competitiveness and fun. He may be remembered for his jokes and Tommy Cooper impersonation.

He was a keen player and organised many competitions often participating along with Janet.

After all the hard work planning and preparing the piste at the Kymin along with his friends and colleagues it would sadden him if he knew Penarth Council are no longer able to accommodate Penarth Petanque Club who now need to find another venue.

Below Malcolm  is photographed with a representative from St Pol de Leon Petanque Association . 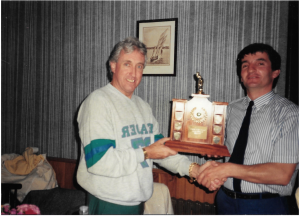 The Welsh Petanque Association would like to send its deepest sympathies to Malcolm’s family.