After the first-round, Pete Beresford & Bob Pugh went straight through to the Semi-Finals with the remaining players shooting again in a repechage, with the top two – Len Field & Pete Westall – joining Pete B and Bob in the Semi-Finals.

Semi-Final 1 saw Bob knocking out Len with only 5 points separating them, while Semi-Final 2 saw the two Peter battling hard with Pete B. emerging victorious by just 3 points.

With Pete B leading off in the Final and taking an early lead, Bob struggled to find any of the form he’d shown earlier in the day until the very last shot of the match where even picking up a 5 wasn’t enough, leaving Peter victorious by just 2 points.

Congratulations to Pete on his victory.

It was great to see every player taking turns on setting up the scenarios and marking.

Special thanks must go to Barbara Vaughan for recording the Scores throughout the day and to Diane Westall for making sure everyone kept their feet in the circles and for running the scoreboards in the Semi-Finals and Final. Also thanks to Derek Jones for videoing all the players heading to Bulgaria in September to help with their coaching and a final thanks to Kon Tomczyk for his excellent organising. 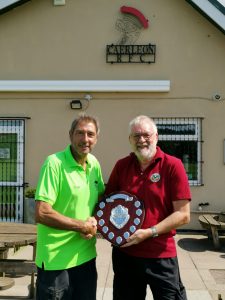 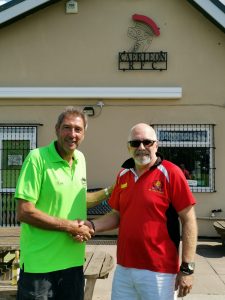