Inviting all WPA Affiliated Clubs and Members to attend this important meeting.

Venue: This will be an online Zoom meeting. Pre-Registration will be required.

There will only be one item on the agenda, which will be to vote on the proposed New Membership and Club Affiliation Fee Structure.

This week the Welsh Squad will travel to Santa Susanna, Barcelona, to represent Wales in the Petanque World Championships Triples between 19th and 21st November. 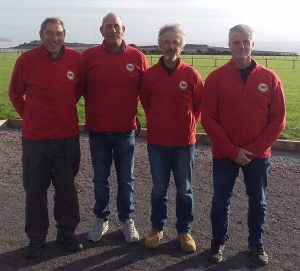 We are sure our members, together with the Executive, wish the Squad the best of luck in their encounters with the best teams from around the world coming together in Spain.

The event is being televised live by LaLiga Sports TV and can be accessed online or by downloading their app to your smartphone.

The Monkstone PC hosted the 2021 NC Singles: Men in variable weather conditions to say the least.  Sixteen members came together to battle it out for the title of Singles Champion; however, this being the last championship of the calendar year, it was pleasing to see a good number taking part from the following clubs:

The Men’s World Championship team were seeded, and it was good to see them finishing in the top four places after the ranking rounds. SWBRC had four players in the top 8, followed by Pontyclun with 2, Caerleon and the Monkstone with one apiece.

Players in the three qualifying rounds recorded no 13/0 wins, and all the games were played in good spirits, but as always, competitively fought.

The following clubs were represented in the Plate competition:

The quarter-finals was a closely fought affair, where it was only decided in the last few ends who would go through to the semi-finals. By this time, the weather had changed, and the sun came out, allowing the playing surface to begin to dry out and ultimately acting several players out.

In a competitive match, the final was between Tom Mills (Monkstone PC) and David Sharratt (Wheatsheaf PC). Tom took a healthy lead against David and had the opportunity to close the game and take the title early. However, David began to fight back and slowly closed the gap to 12/12. With some consistent pointing and shooting, Tom was able to take the last point required to win the match and win the Plate Competition.

Congratulations to all our members taking part in the Plate Competition.

The quarter-finals again was a closely fought round with the four members of the World Championship team pitched against experienced players. The result of the match between Kon Tomczyk (Caerleon RFC PC) and Ken Agius (SWBRC) was the exception. Ken took an early lead and looked to be coasting towards victory. However, Kon is an experienced player, and he fought back to bring the scores level, but a loose point left Ken the opportunity to close the game.

Both semi-finals were closely fought, but consistent pointing and shooting took Ian Bailey and Ken Agius to the final.

The final was an all SWBRC affair, with Ian Bailey slowly gaining a good lead over Ken Agius. With Ian’s consistent point and shooting, he took the match and title 13/6. Congratulations to Ian Bailey for becoming the National Single’s Champion for 2021.

Congratulations to all our members taking part in the championship.

Finally, the WPA Executive would like to thank the Membership and Executive of the Monkstone PC for hosting the championship and allowing their facilities to be used to make the event run smoothly.

The qualification competition was to see which club will represent Wales at the 23rd European Cup for Clubs – 2021 at Saint Yrieix, FRANCE, in early December.

Sully took the lead, winning 5 out of the six singles matches and followed up by winning all the doubles and triples to win the encounter 26 points to 5, which put them in a strong position for the second encounter at Monkstone’s PC.

The order of play was the same. Sully won 4 out of the six single matches; however, Monkstone PC came back and won 2 of the doubles games closing the gap.  To win the encounter, Monkstone PC had to win the final two triples games.

The triples games were both won by Sully, winning the encounter 21 points to 10 and winning the competition 2/0, allowing the Sully to represent Wales at the finals weekend and 29 other clubs representing their countries from across Europe.

Next year the Welsh Cup for Clubs will be on the calendar, and we hope that as many clubs as possible will take part to make this an actual inter-club competition.

Due to the lack of entries the NC Singles: Women has been cancelled.

The following members have registered for the men’s event, which is to be held at Monkstone PC.

There were 20 registered players; however, due to players withdrawing there are now 18.

Based upon the above entries the following competition format will be used and can be accessed by clicking here.

This page will be regularly updated with the latest competition information.

This Sunday (12th), the National Triples Championship for Men & Women. Currently, the following teams have registered for the two events to be held at Caerleon PC.

We require three more men’s teams to achieve the required number of entries.

We require six more women’s teams to achieve the required number of entries.

We are sure that several more members are thinking about taking part, take the plunge, and registering.

Online entries can be made by clicking here.

Thirteen teams took part and after the ranking rounds the knock out stage was split into a Cup and Plate and played out as follows:

The semi final was between:

The WPA would like to thank the Executive and Membership of Brecon Boules Club for their support during the competition.

After a few years away, it was great to return to playing at the picturesque Brecon PC on the side of the Brecon canal basin. Eight teams took part and after the ranking rounds the knock out stage was played as follows:

The semi final was between:

The Final was a close affair with the scores evenly matched

The WPA would like to thank the Executive and Membership of Brecon Boules Club for their support during the competition.

Wenvoe Petanque Club is sad to announce that their long-standing Club President, Mike Coleman, passed away on Sunday 8th August 2021 after a short illness.

​Ever-popular, Mike had been a member of Wenvoe PC since the 1980s, and had served as Club President for many years. He was a long-standing and loyal member of the WPA.

Many of our members will have played against Mike and felt the impact of his classic “boule-to-boule” shooting style.

Always willing to support and share his advice, Mike will be deeply missed.

​Mike’s funeral will be a private, family-only service.
​
The WPA would like to extend its sincere condolences to Mike’s parter, Gill and all their family at this difficult time.

Summer has finally arrived, and we can begin to enjoy those outdoor activities that we have missed so much, one of which is boule. Many of our clubs are endeavouring to host open competitions. I encourage as many members to support these competitions as they help to provide valuable funds to their existence.

As you know, as of Saturday 17th July, Wales moved from Level 1 to Level 0 for organised outdoor activities; this move has resulted in a change in the clubs’ requirements.

The principle change is regarding social distancing, which is no longer a separate law enforcing the 2m gap between individuals. However, social distancing is still essential and must be included in each clubs risk assessment, which by statute every club organising outdoor activities for their members should have.

Every day we see that the infection levels are increasing. However, we are encouraging clubs and members to play; we all have to be sensible to ensure that we can play in the knowledge that all precautions are being taken. To help, the Executive is currently reviewing our current guidance notes to Clubs and Players, and these will be updated to the website soon.

Towards the end of 2020, the world governing body for our sport (FIPJP) amended the rules; some keener members have read them and endeavoured to show off their newfound knowledge to everyone they play. So, to enable you to check that they are correct, we have produced an A5 booklet to be issued to each member. These will be sent to your club for distribution to you.

We are not expecting you to read them immediately and become experts, but if you are unsure of a rule, you can have a look yourself without the fuss of tracking down a copy. Some of the rules may not apply if you play ‘local’ rules set by your club, no problem, as long as you enjoy the sport.

Finally, due to the cancellation of the major European Championships because of the continued concerns from Covid-19, we have a surplus of 2021 pins. Therefore, the Executive have decided to give all our members a 2021 pin to go with the 2020 pin you all received last year.