The annual Petanque England Inter-Regional competition was held at Hayling Island last weekend
14th – 15th September, to which the Welsh Petanque Association had their much-appreciated invitation.

This professionally well organised and most enjoyable event was held in glorious sunshine and, as in previous year, lived up to all its expectations of competitiveness and enjoyment of the sport of petanque.

It gave the WPA squad a chance to catch up with old friends and make some new ones for the future and as always to compete at their very best throughout the competition.

With the sad news of one of the most respected and liked Welsh players, Peter Westall, passing away prior to the event, the determination of the Welsh squad was stronger than ever and although some of the results did not go their way there was no relenting from the task they had set themselves, right down to the last boule of the very last game which saw Wales 7 (Super Sue Foster – Sean Smith – Jeremy Clare and Captain, Jayne Dunn) in a fierce battle with Great Western 8 both sides giving nothing away and with the full support from both squads cheering every boule made a thrilling end to the tournament

The WPA would like to expresses their appreciation to PE for our invitation and all involved for their hard work on organising this tournament and hope to see you all again next year.

Thank you to all of the players who represented the WPA in this event your determination and team spirit throughout this occasion was second to none, well done, Peter would have been proud of you I’m sure.

Thanks to Wales 8 (Wally Wilkinson – Dai Bevan – Ian Wheeler – Tania Howard) for providing our base camp gazebo much appreciated.

A big thank you goes to Matthew Clare who stepped in and took on the task of squad manager ensuring all teams went to the correct lanes, scores were entered correctly and signed by team captains, before handing them in to the control desk. A daunting task of responsibility at the best of times but for a junior to have the confidence to take the task on, was exceptional. Well Done Matthew

Finally a huge thank you to Ken Aston for his generosity in sponsoring the new WPA representational shirts, very much appreciated by all members. 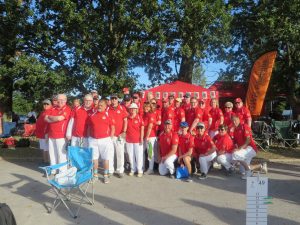 It is with a desperately heavy heart that I write to inform everyone of the tragic death earlier today of Peter Westall.

Peter was in Bulgaria with Diane taking a short holiday and preparing to play in the upcoming European Veterans & Men’s Triples competitions next week.

Peter died suddenly in his hotel room this afternoon at approx. 2.00pm local time. Diane was with him at the time.

I have been in communication with Diane all afternoon and evening. Their daughters, Louise & Lindsey, are en route to Bulgaria to be with her.

Please can I ask everyone to respect the family’s privacy at this very difficult time.

This is a busy time for players representing Wales:

Also this weekend (14-15th September), the Petanque England Inter-Regional Championships is being held at Hayling Island.
The Wales Squad is:

I’m sure all our members would join us in wishing all our players the best of luck in their respective competitions. Play well and enjoy yourselves.

As many  members will be aware, earlier this year we managed to secure a very generous sponsorship arrangement with telent, the IT company.

The sponsorship was approved by the company’s CEO, Mark Plato.

It is with a great sadness that we heard earlier this week that Mark had tragically lost his life in a motorcycle accident.

The Welsh Petanque Association would like to pass on its sincere condolences to Mark’s family and friends.

The Welsh qualifier was held in glorious sunshine at the Monkstone Petanque Club on Sunday 8th September, with 11 teams competing for the 4 available places.

This was a chance for players to claim a position in the Welsh Squad for this much revered and enjoyable annual event which started back in 1989 when Wales invited Scotland to play in Cardiff the following year Ireland joined the event and the rest, as they say, is history. The event is rotated yearly between the 3 nations and is always heavily contested by each country to gain a place in their national squad this year was no exception in Wales.

All the games were highly competitive and went to the last game result where several teams still had a chance with a last win to ensure a place in the national squad.

Thank you to all the teams that took part and congratulations to the successful teams who will represent Wales next year (Lets bring back the trophy to Wales).

Monkstone PC for their hospitality and use of their facilities and

Tony Smith for running the competition well done all

To be held in

The 2020 Celtic Challenge qualifier will be held at

Please email your entry to

Payment can be made on the day

The following 11 Teams have entered – ideally we could do with one more to avoid BYEs:

If you think you’ve entered but your Team isn’t showing here, please contact me ASAP.

The 2019 WPA League season was concluded on Wednesday 28 August 2019. The final round of matches did not produce any great surprises as most, if not all, of the top and bottom places had already been decided.

Congratulations to Isca Romans who took the Division 1 title. They were hotly pursued by Monkstone Monarchs who just could not maintain their challenge and fell away in the last two weeks to finish second.

At the bottom, you could not have got odds on Monkstone Minotaurs being relegated at the half way point of the season but they staged a remarkable run in July & August with 4 wins and 2 draws propelling them up to fifth place leaving Wenvoe Dragons and Penarth Pendragons in the relegation places.

Congratulations to Wenvoe Raiders who took the Division 2 title bouncing straight back to Division 1 at the first time of asking after their relegation last season. The Raiders just pipped Pontyclun Badgers who will be playing alongside them in Division 1. The Badgers have fallen just short of promotion a few times recently but have finally made it.

At the other end of the table Cwins were unfortunate to drop back into Division 3 after being promoted last season taking Creigiau Crusaders with them.

Congratulations to Monkstone Marauders who took the Division 3 title again bouncing straight back at the first time of asking after their relegation last season. The Marauders established a lead they never relinquished right at the start of the season and confirmed the top spot with 3 games to spare. Penarth Panthers just pipped Monkstone Inn Youth to grab second spot and a place in Division 2 next  season.

At the other end of the table the two newest teams to the League – Church Inn (2nd season) and Ystradowen Newts (debut season) both managed to avoid the bottom spot – well done to them both – which this year was claimed by Creigiau Casuals.

NOTE:  Depending on the number and spread of entries to the League for the 2020 Season, it is possible that there could be some adjustment to the relegation spots if it is necessary to balance the number of teams in each Division. This will not be resolved until Spring 2020 when all the entries have been received.

The first round of the Welsh Cup for Clubs was held at Abergavenny on Sunday 1st September.

With 6 Clubs taking part, and 2 matches played, these are the latest standings:

First Round To Be Held At

Please email your entry to

Please note – all Club Secretaries have previously been advised of this event.

Congratulations to Gemma Foster and Peter Westall on regaining the title they held in 2016 & 2017.

Held in very changeable conditions at Pontyclun RFC Petanque Club, the results were: 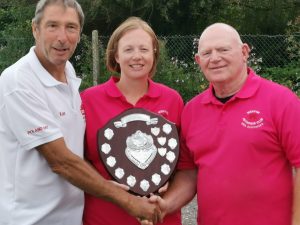 The last national competition of 2019 took place at Pontyclun Petanque Club on Sunday 18/8/19.

This was the last chance for WPA members to win a title for this year and with very challenging piste’s and unsettled weather the scene was set to be a very competitive event.

With the draw and groups completed the event started in reasonable weather and with a little surface water from the deluge of rain during the night.

The second round was again successful for Foster / Westall with a win in a tough game over McCaddon / Morris, Vaughan / Tomczyk also recorded a win against

Round 3 saw Foster / Westall and Vaughan / Tomczyk both take wins making it three in a row for both teams and a place in the main semi – final.

Other wins in the round came from

With lunch over, the semi- finals commenced in the main it was poised for a possible rematch of last year’s final with Foster / Westall progressing to the final with a win over Adshead / Griffin

Foster / Westall v Vaughan / Tomczyk was still possible, however not to be as McCaddon / Morris took the next few ends to win 13 – 7 and make the final.

In the plate wins from Falconer / Field and Brooksbank / Cannon set up the plate final.

The final of Foster / Westall v McCaddon / Morris was expected to be another tight game as it was when they met in the earlier rounds.

Unfortunately for McCaddon / Morris, who had played well throughout the day, this was not to be when Foster / Westall went up a gear with some excellent pointing and shooting to win the game convincingly 13-1 and take the welsh National Triples 2019 title.

The Plate final Falconer / Field v Brooksbank / Cannon was a closer affair with enthusiastic applause for both sides when points were won.

However as always someone has to win and the victors, much to the delight of Falconer, they were the winners 13 – 8

Congratulations too both winning teams and commiserations to the runners up, well played everyone and thanks to all players who made it a very enjoyable day of boules.

Also thank you to Pontyclun Petanque Club for their hospitality and for hosting the event, all participants for their support and last but by no means least to Graham Attfield for Umpiring and time keeping throughout the day, well done