SUPERB WIN FOR THE FIRST-TIMERS

The first National competition was finally held on Sunday 6th September at Pontyclun PC’s base at Pontyclun RFC.

It seemed like a very long time since the last WPA competition was held, way back in March, when the President’s Cup was held at the Wheatsheaf Inn.

After all the uncertainty surrounding the COVID-19 pandemic and after the relaxation of the lockdown restrictions imposed by the Welsh Government, the WPA finally kicked its season into play, when 6 teams entered the National Doubles for Women.

A trial doubles competition had been held at Pontyclun and the lessons learned were used as the basis of the play for this competition.

For the vast majority of the players, this was their first competitive outing of the year, and a number of the teams were new to each other having not played together previously, as well as a few more familiar pairings. The competition was played under the WPA’s published guidelines, including the regulation 2m social-distancing requirements. These included enhanced hygiene, recording of everybody’s temperature, recording of personal contact details for compliance with the Welsh Government’s Track, Trace, Protect programme, 30-person-limit within the “activity bubble” and full 2m social distancing.

With 6 teams entered, the “round-robin” format was adopted so every team played the other 5.

September being what it is, we experienced hot sun, chilly winds, light rain – often all within a few minutes!

The pistes at Pontyclun are renowned for their unforgiving nature, but this didn’t deter any of the teams and the quality of play overall was of a very high standard. This was evident by the start of Round 5 where, despite one team having built an unassailable lead, 4 of the remaining teams were in with a chance of the runners-up spot.

The honours of the day, with a clean-sweep of 5 wins out of 5 matches went to the Monkstone PC-based pairing of Gill Clarke and Gill Greenwell.

“The Gills'” victory is even more remarkable because, not only was it their first competitive pairing, it was Gill Greenwell’s first National competition, it was her first visit to Pontyclun and she only started playing pétanque in June of 2019.

Huge congratulations to our 2020 National Doubles for Women champions, and our thanks to Pontyclun PC and Pontyclun RFC for hosting the event in a safe and sporting way.

Congratulations to Ray Williams (Caerleon RFC PC) and Jackie Harris who tied the knot and married on Tuesday 1st September.
Best wishes for the future.

We now feel in a position to resume a number of National Competitions.

As a result, we have now published an updated Playing Calendar on the WPA Website.

Earlier this week, we wrote to all Club Contacts asking if they could host any events and at the time of publication we are still awaiting some responses. As a result, all events are currently awaiting confirmation of Venue, so these will be updated as we know them.

ALL EVENTS WILL BE PLAYED UNDER THE WPA-PUBLISHED COVID GUIDELINES.

Please note that we have added an alternative arrangement for paying Competition Entries to the drop-down list in the on-line entry form. We now have the capability of paying “on the day” by card – either via chip & PIN or (preferably) via Contactless payment (including Apple & Google Pay). This will help us to minimise the amount of cash we need to handle – and with this in mind, we would ask that if you have to pay with cash on the day of the event, please make sure you have the correct money. NO CASH CHANGE WILL BE GIVEN.

The Cut-Off for each Competition will be 7 days before the date of the event. As you will know, this has always been the case, but due to the need to plan the piste-layouts and draw, we need to have the numbers of entries finalised in advance to enable this to happen. I would, therefore, ask you to not delay entering.

You will also see that we have separated most events into Women & Men’s events as this will help us with managing the event under the current COVID regulations. In addition, we have added 2 “qualifying” dates for the Men’s Doubles – this may be reduced to just the Sunday if entries permit.

If these events prove successful, and subject to further changes with the WG COVID Regulations, we hope to add further events in the coming weeks.

We hope you feel comfortable enough to consider entering these events and we look forward to welcoming you back and seeing you on the piste.

I hope you and you families are continuing to stay safe and well.

In an effort to return to some competitive play, a “trial” event was held last Sunday, 16th August, with 8 doubles playing in accordance with the WPA’s published guidance.

We received some invaluable feedback both on the day and subsequently, for which we are very grateful.

The EC met yesterday and reviewed the outcome of this trial event. We have waited until today to publish our findings and update our Guidelines in order to see if the Welsh Government’s latest review contained anything that may affect our decisions (for example, we are aware that the WSA had submitted a recommendation to the WG to increase the size of organised outdoor gatherings, and reduce the 2m social-distancing regulation to 1m+).

As a result of our findings and the subsequent discussions, we have decided that we are happy to allow Clubs to make use of all their pistes PROVIDED they have sufficient space at the edges and ends of their playing area to establish “safe havens”, where players can stand while their opponents are playing. Please note, however, that if there is insufficient space to create these “safe havens”, the current guidance which only permits play on every-other piste MUST be retained.

Our Guidelines for Clubs have been updated to reflect this, and contain an explanatory diagram, and can be found on our COVID-19 Webpage.

The Executive has contacted all Clubs to ask for their availability to host a number of National events and will be publishing a Calendar in the very near future.

The preliminary phase of the WPOC has finished and the qualifying results are out for the WPOC 2020 Championships.

Three WPA players who decided to enter to represent Wales had limited time to produce the necessary video for the qualifying sessions.

Despite the lack of time the results from the players exceeded any expectation, results as below:

Congratulations to all players an excellent performance.

Derek has now performed another parthian shot for the final phase and this is currently being assessed by the five judges.

Following our attendance of the Welsh Sports Association (WSA) call on Tuesday morning the EC met on Wednesday 5th August.

Full details of the Guidelines, along with the WG FAQ document and the UK Government’s advice on cleaning in non-healthcare situations can be found on the WPA’s COVID-19 Advice and Information page here.

As a result of studying the relevant sections of the WG Guidelines, we have updated our own guidelines, which are also published on the above page.

To emphasise a number of points:

The Executive also moved to draft an updated playing calendar with a limited number of events which will be further refined and published in the near future.

As I stated in my previous update, the Welsh Government (WG) announced a further relaxation of the rules, including a resumption of outdoors activities from Monday 13th July.

Following our attendance of the Welsh Sports Association (WSA) call on Monday afternoon the EC met on Tuesday 14th July and then on Wednesday 15th received an updated copy of the detailed Guidance from the WG.

Full details of the Guidelines, allow with the WG FAQ document and the UK Government’s advice on cleaning in non-healthcare situations can be found on the WPA’s COVID-19 Advice and Information page here.

As a result of studying the relevant sections of the WG Guidelines, we have updated our own guidelines, which are also published on the above page.

To emphasise a number of points:

There is another meeting of the WSA’s Outdoor Sport Phased Return Planning Group on Monday 20th, so there may be a further update to these instructions after that.

As you will, no doubt, be aware, the Welsh Government (WG) has today a further relaxation of the rules, including a resumption of outdoors activities from Monday 13th July.

“The Welsh Government is also making changes to the regulations to allow larger gatherings of up to 30 people outdoors only where these are organised and supervised by a responsible person for sports and other leisure activities and classes.

This will allow sports and leisure activities, such as fitness and dance classes to take place outdoors.“

The WPA will be joining a WSA call on Monday afternoon and the EC will meet following that and issue a further statement as soon as possible afterwards.

The WG’s latest press-release can be found here.

As you will, no doubt, be aware, the Welsh Government (WG) has today allowed a further relaxation of the rules, in particular the lifting of the 5-mile “Stay Local” instruction.

The EC met this afternoon and has realised an update of its guidelines.

The following graphic provides a summary of the updated guidelines: 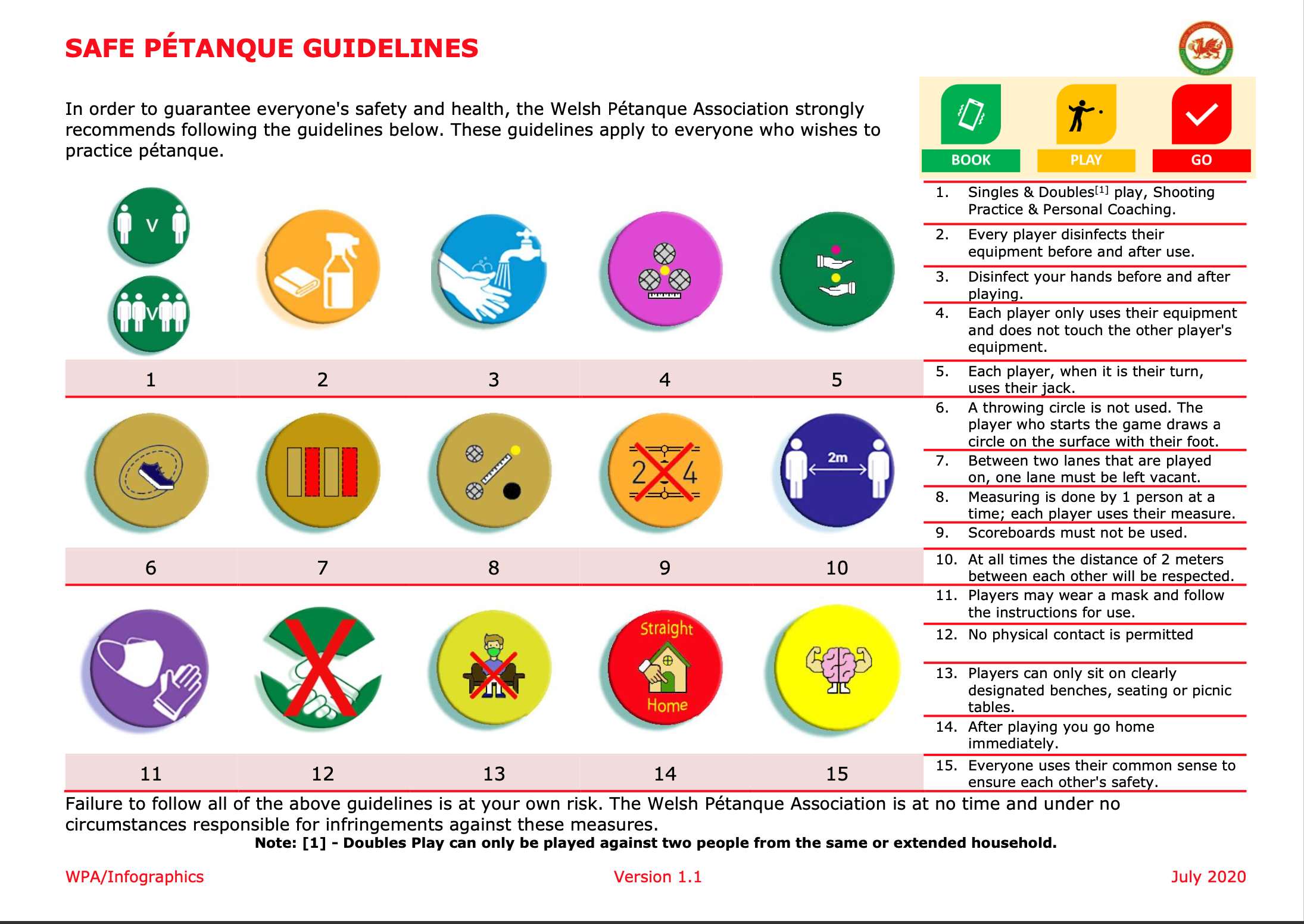 A copy of this summary can be downloaded here.

The updated Guidelines for Clubs can be downloaded here.

The updated Guidelines for Players can be downloaded here.

The WPA has produced a suggested playing guide that should help with managing singles-play during a game. A copy can be downloaded here.

The WPA has also produced some signage posters which Clubs can use to help with directions. A copy can be downloaded here.

The EC will continue to monitor the situation and will issue further updates as we have them.

In the meantime, we hope you and your families stay healthy.

It was my privilege to attend on behalf of the WPA.

The CEP Reports discussed at the Meeting can be found here.

Congratulations also to Mike Pegg on his re-appointment as CEP President for another term.

Two items discussed that particularly affect Wales are the changes to the Inter-Federation Transfer procedure and the changes to the Approved Playing Kit regulations – links to both of these can be found on the WPA websites and will be discussed in greater detail at the forthcoming OGM.